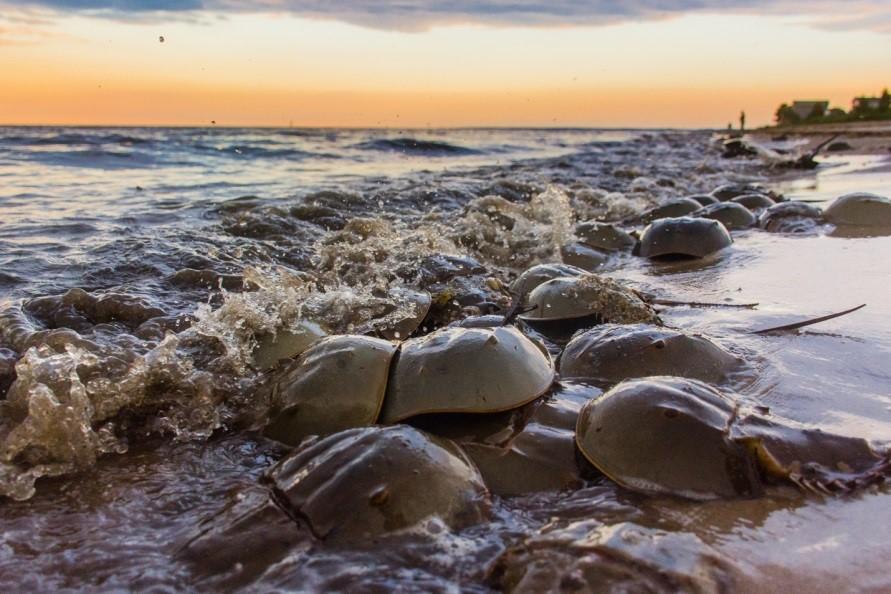 The Delaware Bay is home to the largest population of the American horseshoe crab. Horseshoe crabs are, in fact, Delaware’s official state marine animal. While these strange, prehistoric creatures haven’t changed much in their appearance in the last 450 million years, that’s not all that’s been a constant — every spring, thousands of horseshoe crabs descend on the shores of the Delaware Bay to spawn. It’s quite a sight — here’s how you can see it!

The spawning season typically occurs in May and June, with the highest concentration around new and full moons and particularly during the nighttime high tide. Some of the best places to view the spawning are at Bowers Beach and the DuPont Nature Center in Milford. The crabs can be seen at Pickering Beach and Kitts Hummock in Dover as well.

The spawning ritual begins with male crabs clustering along the shore as females arrive (you can distinguish the males by their size — approximately two-thirds the size of the females). Males often try to catch on to a female’s shell to be pulled up the beach to the high tide line. Females scurry on the shore, pausing every few feet to dig a hole and deposit as many as 20,000 eggs at a time. Males jockey to fertilize the eggs, and once complete, the crabs leave and waves wash sand over the nests.

When you go, be sure to wear boots or other sturdy footwear. If you see a crab that’s been flipped upside down, give them a hand and flip them back over! Despite their size, horseshoe crabs are not dangerous at all — their tails are used mostly as rudders when they swim. And keep a look out for the little green eggs! Later in the season, you may be able to see some developing eggs become clearer — you can easily see the tiny crab swimming inside at this point!

The peak season ends after June, so make sure to go before then! For more information, visit the Delaware Department of Natural Resources and Environmental Control website.